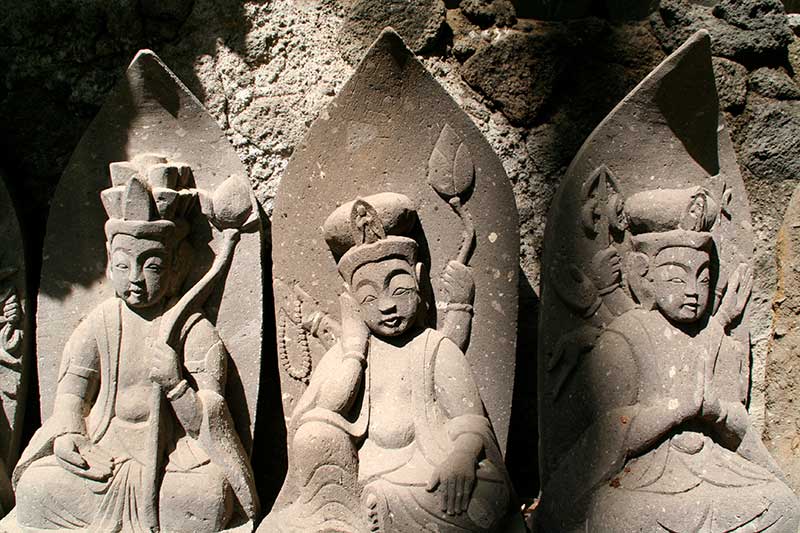 If, as tourism pioneer Thomas Cook wrote, " …the Seto Inland Sea is more fabulous than any [other sea]. It is so beautiful, a conglomeration of all the best things about all the others.", then Oita Prefecture is its perfect complement. Nestled into the western end of the Seto Inland Sea on Kyushu, Oita is a delightful conglomeration of many of the best qualities of Japan; a feast for all the senses, but a gem of a place that is still little explored even by the Japanese themselves.

Oita has a beautiful, richly-varied and lush countryside that ranges from intricately eroded coastlines dotted with islands, peninsulas and inlets to the wide, sweeping Beppu Bay; from coastal plains through elegant valleys to high plateaus and onto soaring mountain ranges and active volcanoes. Throughout Oita, myriad crystal-clear streams tumble over waterfalls, ripple through sunlight-dappled forests and deep rock gorges, to farmlands of rice paddies and wheat fields before finally flowing to the sea. The friendly, relaxed locals provide a warm welcome to their charming fishing towns and farming villages, which are redolent of a more traditional, quieter life. In any neighbourhood, carefully tended Shinto shrines and intricate Buddhist temples are reminders of the ancient spirituality that still pervades daily life, which each year reaches its zenith during the colourful, sometimes unique, festivals that punctuate the seasons.

A year-round, mild climate combines with Oita’s topography to afford a source of fresh food that is not only one of the most varied but also the best quality in all Japan. Here any meal is a veritable banquet of seasonal dishes with ingredients sourced from the seas, rivers, fields, forests and mountains satiating the most discerning palate.

A fine preprandial to any evening feast is a soak in onsen hot spring baths fed by thermal waters derived from deep below the earth’s surface. Oita boasts the largest concentration of onsen fed with the greatest volume of volcanically heated waters making the prefecture the hot spring capital of Japan, if not the world. It is a mecca for lovers of onsen with the added elegant twist of the distinctive Japanese culture associated with bathing. Onsen are found throughout Oita from the laidback, seaside resort at Beppu, where steam from onsen billows over the city; to chic Yufuin; through homely Nagayu; to remote mountainside hot spring pools, which are only accessible to the earnest trekker.

Oita has been at the heart of Japan’s ancient culture from the earliest days and at Usa is found one of the country’s most important shrines, a shimmering vermillion structure set in a primeval woodland to venerate Hachiman, a Shinto god and the divine protector of the nation. The same shrine was also the source of the esoteric Shinto-Buddhism that imbued Japan for over one thousand years and can still be found in the 1,300-year-old Rokugo-Manzan culture of the Kunisaki Peninsula. The rise of the samurai led to the eclipse of the once-powerful religious institutions and the monumental ramparts of Oka-jo Castle atop a hill is an imposing reminder of this warrior class. These same samurai welcomed the Jesuit missionary Francis Xavier to Oita in the mid-16th Century and, in 1600, off the coast also saved the shipwrecked Englishman William Adams. Adams subsequently became a samurai and confident of Tokugawa Ieyasu, the most powerful shogun and arguably most significant figure in Japanese history.

There is no record that Thomas Cook ever visited Oita, but if he had done so surely he would agree that it is the impeccable complement to his fabulous Seto Inland Sea, for Oita is a beautiful conglomeration of all the best things about Japan.

Paul Christie
CEO Walk Japan Ltd and resident in Oita for over 20 years.