With more onsen hot springs than anywhere else in Japan, Beppu takes the crown as the nation’s top onsen hot spring destination. So much hot water wells up from beneath the ground here that plumes of water vapour venting into the skies across the city make it look like an industrial complex.

The reality, however, is pleasantly very different as Beppu has been a seaside resort destination for centuries. In the city centre, the narrow streets, market stalls under the railway tracks, and shopping arcades make for a pleasant, strolling exploration. Hidden in the back streets nearby is Takegawara Onsen, famed for its volcanic sand baths. The period exterior is matched by the aged-patina tiled and wood interior. The ladies in attendance chatter away as they cheerfully shovel away burying their customers in the therapeutic sands. Extend the stroll to the nearby seafront with its yacht harbour, park and Beppu Tower, a 100 metre high structure wonderfully evocative of 1950s Japan.

Another pleasant neighbourhood to stroll around is Kanawa, an old quarter perched high up on a hill behind the city centre. It has so many onsen that steam emanates continually from grills in the streets and, above, from towering vents. Locals are to be seen throughout the day to-ing and fro-ing with towels in hand to the many public baths in the neighbourhood. Venture a little further afield from Kannawa to Myoban Onsen for the picturesque thatched huts where, within, sulphuric ‘flowers’ are produced. Look hard here for some wonderful onsen otherwise known only to the locals. The rotenburo open-air baths are a special treat.

Beppu has two types of hot spring; onsen for bathing in and Jigoku Hell Onsen. The latter are literally hells and definitely only for looking at.

B-CON – Beautiful, Big and Beppu Convention – Plaza, is Beppu’s principal contribution to Japan’s body of modern architecture. Designed by local son, Arata Isozaki, B-CON Plaza is a multi-use convention and concert hall facility. The observation deck at the top of the Plaza’s Global Tower provides grandstand views across Beppu and the Seto Inland Sea. Close by is the Rakutenchi amusement park. Founded in 1929, it harks back to a life of simpler entertainments and is ideal for families with younger children.

Beppu has a vibrant and thriving cuisine, arts, crafts and music scene. Beppu Onpaku is an acclaimed festival of local, experiential tours, that has been instrumental in the rejuvenation of the city. Meeting Point Music Festival, featuring the acclaimed classic pianist Martha Argerich, is a long running, annual extravaganza and highlight of the cultural year. The international feel this event has brought to Beppu has been reinforced by Ritsumeikan Asia Pacific University, which opened its doors in 2000. Its 5,000-strong student body is made up in equal numbers from students from across the nation and overseas with classes taught in both Japanese and English.

Evening entertainment is largely concentrated in the area between Beppu Railway Station and the sea. Here are found many bars, especially traditional Japanese sunakus but also one or two catering to a younger, multicultural crowd. Hit Parade, a rock ‘n roll live music venue, is a popular stalwart on the local scene. 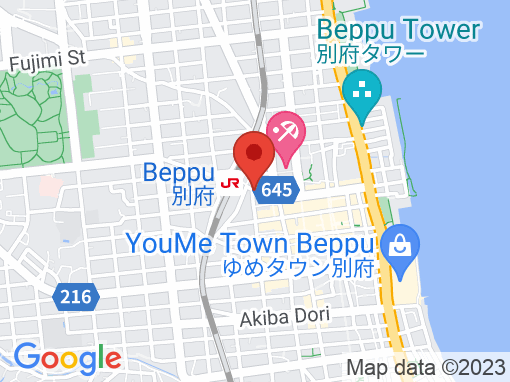