Like so much to be found in Kunisaki, nothing fully prepares one for Tennen-ji temple, a beautifully rustic and understated thatched structure protruding from a cave at the base of a monumental cliff. On its own it would be sufficient, but together with Kawanaka Fudo, a giant rock carved with Buddhist deities set in the adjacent river, and also Mumyo-bashi, a tiny bridge spanning two precipices on the ridge high above, the scene is magnificently poised in its serenity. Nevertheless, one night at the lunar year, this peace is shattered by the raucous Shujo-Onie, Kunisaki’s greatest festival, when rumbustious devils, bearing flaming torches, run amok to the delight of the locals and curious visitors alike.

Reputedly to have been founded by Ninmon in 718 A.D. much of the temple was washed away by a deluge in 1941. No resident monks has been here ever since but the deities found including Kannon Bosatsu, Yakushi Nyorai, Shaka Nyorai, Senju Kannon, Fudo-Myo-o, Gakko Bosatsu and Nikko Bosatsu and cared for by the locals. 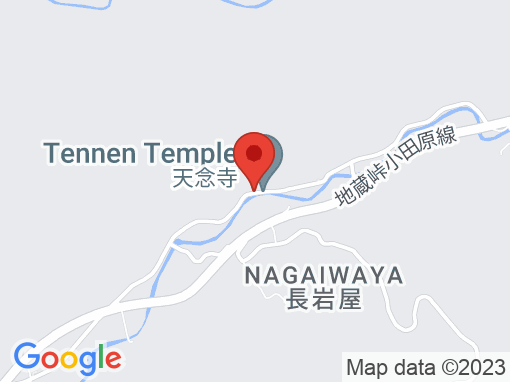