Verdant mountains close in on both sides as the road from Hita reaches Onta, a beautiful and peaceful hamlet aside the Oura-gawa river. Tucked into the furthest reaches of a narrow valley, Onta’s charm and the pottery, which it gives its name to, are well-worth making the journey.The hamlet comprises of 14 households, ten of which make their living from pottery in a way that has little changed since Onta-yaki began to be produced here by Yanase Sanemon, from neighbouring Chikusen, along with the local Kuroki and Sakamoto families in 1705. Each step in the pottery-making process is still carried out by hand including firing the large, wood-fuelled climbing kilns. Most intriguingly, the river flowing through the centre of Onta has been harnessed to drive karausu wooden hammers that pulverise kaolin rock into clay powder. The slow, rhythmical beat of these large beam hammers striking the kaolin together with the splashing of water, as the beams tip up to full height, is entrancing. Once heard it is not surprising to learn that this unending, repetitive orchestration has been selected as one of the ‘100 soundscapes of Japan’.Onta-yaki, a practical ware made for daily use, began to find wide popularity after Yanagi Soetsu (1889-1961), the founder of Japan’s mingei arts and populariser of anonymous craftsmanship, recognised it in 1931 for its practicality and simple, yet beautiful motif design. Bernard Leach (1887-1979), the renowned British potter who retained strong ties with Japan throughout his life, worked in residence here in 1955 and 1965 helping to bring Onta-yaki to a wider, international audience.Onta is a tight-knit, collective community, where everyone works by consensus for the greater good of their society. Here the pottery, with its distinctive slipware designs, holds sway over individual potters, whose names never appear on a finished item. And, in order to ensure future mutual prosperity, each family, all of which go back generations, may train only one successor while their potteries are restricted to a maximum of two wheels for throwing pottery.The life of Onta firmly revolves around pottery production and rarely stops for visitors, who are largely free to explore as they wish. It is a delightful place to stroll around, soak up the atmosphere, savour the fragrant smell of wood firing the kilns, and loose one’s thoughts in the rhythmical sound of the karausu. Each family has a shop, where their classic plates, bowls, vases and pitchers are available to browse and purchase at reasonable prices. Pressing a bell summons a member of the family from their work to attend the otherwise unmanned space.Onta is not the last settlement at the head of the valley. Several hundred metres beyond, up and along a narrow road, is a Motoe-machi, a clutch of farmhouses dotted around paddy field terraces. A very different scenery that beautifully complements the village of potters. 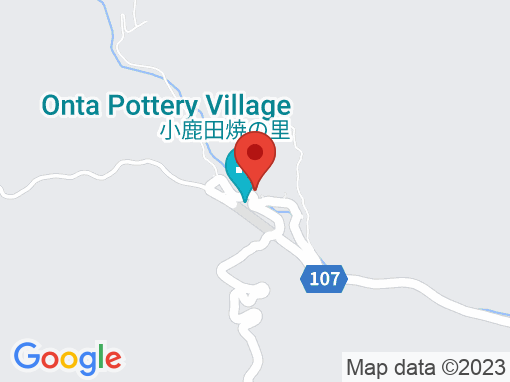