The ‘Kyu’of Kyu-Sento-ji means ‘former’ and only the extensive grounds of what once was one of the greatest of Kunisaki’s temples remain. Today, a quiet lane leads to a forest footpath, which winds first under a torii shrine gate, before passing a group of stone Buddhas and stupas. Beyond here the path turns to flag stone and begins to rise steeply aside towering stone retaining walls that indicate the nexus of the old temple and hint at the power of the old institution.

Two impressive Nio deities are the sole remaining residents; guardians of the long-gone temple buildings that once regularly resonated to the sound of monks chanting to the rhythmical beat of a drum as the smell of incense curled through the air. Each year in late spring and early summer, a profusion of white irises blankets the grounds, a beautiful memento of the lives once led here.

The flag stone path continues and steepens into steps, at the top of which is one of only two remaining temple sub-structure remaining. In 1968, the surrounding forests were swept by fire, destroying the final vestiges of the original buildings and Sento-ji, was rebuilt, albeit on a far more modest scale, on its current site in the valley below. Occasionally the sole resident monk at the nez temple can be found holding pray at Kyu-Sento-ji to Nimon, who left this mortal coil here. His grave is found under the forest canopy amongst the serried ranks of hundreds of carved stones, graves of the monks who also ended their lives here. A further and longer climb leads to the ‘fortress rock’ peak of Mt. Fudo, which houses in its shadow the second structure, Itsutsuji. 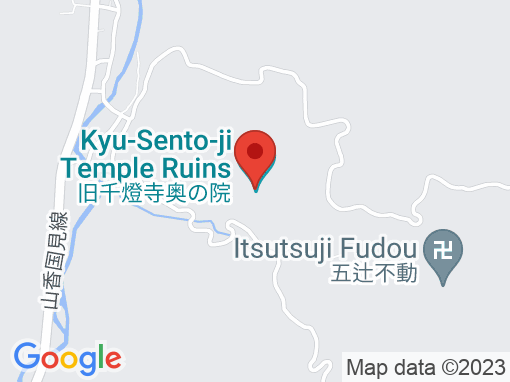