Fuki-ji temple’s main hall is perhaps the simplest and most elegant Buddhist structure found anywhere  in Japan. Built in the 12th Century, it is also the oldest wooden structure in Kyushu. Fuki-ji is beautiful to see throughout the year but especially so when the surrounding trees are  in their vibrant autumn foliage see it at its best.

Recognised as a National Treasure, Fuki-ji is listed with the Phoenix Hall at Byodoin in Uji near Kyoto and the Golden Hall at Chuson-ji in Hiraizumi. All three are dedicated to the Amidha Buddha yet unlike its richly decorated and celebrated peers, Fuki-ji today has an air of time-worn, tranquil beauty. The approach to it through bucolic countryside gives little inkling of its presence found on a slight rise overlooking a tiny hamlet. A short flight of worn, ancient stone steps, flanked by two fearsome-looking Nio guardian deities, leads to the temple’s main hall, an intimate and serene building that demurely blends into it surroundings.
Fuki-ji, however, was once highly decorated and faint vestiges of this can still be seen on the walls of its interior. These remaining phantom-like depictions, however, only add to the beautiful sense of delicacy and repose generated by the figure of Amidha Buddha seated at the hall’s centre.

Legend has it that the statue of Amidha at Fuki- ji was carved from one giant kaya Japanese nutmeg-yew tree. The remainder of the tree was used to create the main hall and also the statue of Daiitoku-Myo-o at Makiodo. 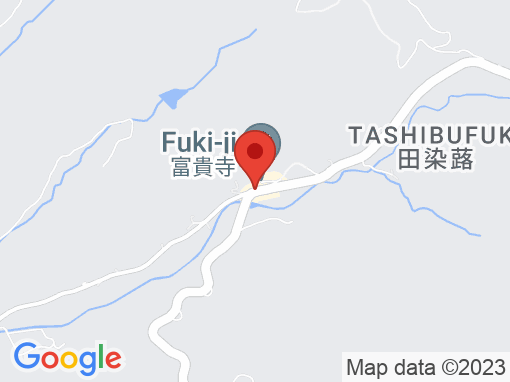